Annual Report to the Nation on the Status of Cancer – 2018

The Annual Report to the Nation on the Status of Cancer, Part I: National Cancer Statistics provides updates on rates of new cases and deaths for different types of cancers. The main conclusions from the report include: the rate of new cases of cancer continued to decrease for men but remained stable among women; significant declines in cancer death rates continue among both men and women; differences in rates and trends by race and ethnic group remain; progress in reducing cancer mortality has not occurred for all sites, with the most notable exceptions being liver cancer and uterus cancer; early cancer detection and treatment are associated with potential benefits; and continued monitoring of national statistics identifies areas for potential intervention and control to reduce the burden of cancer in the U.S. population. Further information about rates of new cases and deaths for different types of cancers are detailed below: 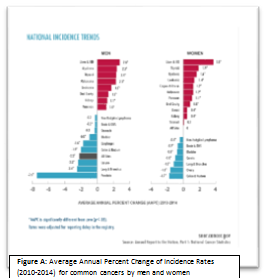 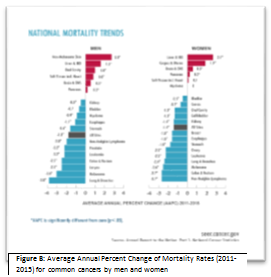 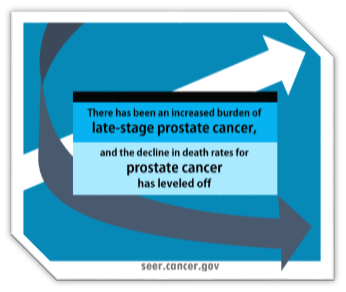 The Annual Report to the Nation on the Status of Cancer, Part II: Recent Changes in Prostate Cancer Trends and Disease Characteristics examines rates of new cases and deaths for prostate cancer. In particular, the report looks at these national trends and their relationship with prostate-specific antigen (PSA) screening rates, among other factors. The main findings from the report include: there was an increase in the incidence of late-stage disease from 2010 to 2014, a change that chronologically followed new recommendations in the U.S. Preventive Services Task Force guidelines for PSA-based prostate cancer screening; newly diagnosed patients are less likely to present with low-risk localized disease and are consequently less likely to be eligible for active surveillance; and there was no increase in the incidence of patients with other high-risk characteristics to date. The researchers concluded that these findings illustrate a trend of increasing late-stage disease after decreasing PSA screening at the population level.

Other important findings are listed below:

To learn more about the Annual Report to the Nation on the Status of Cancer, visit seer.cancer.gov/report_to_nation/.