Gonçalo Forjaz has joined the Surveillance Research Program as a Guest Researcher with research awards from Fulbright and Luso-American Development Foundation. Gonçalo has nine years of experience in the areas of cancer registration and descriptive epidemiology. Gonçalo will work on predictive analytics of the future cancer burden and the attributable causes of cancer in the Region of the Azores, Portugal. He will also provide guidance and training for NCI’s work with the IARC’s regional hub for the Caribbean countries.

As a Master’s student, Gonçalo conducted the first study of human cancer incidence within the Azores population, and later worked at the Azores Cancer Registry. As a cancer registrar, he participated in several international cancer surveillance studies such as EUROCARE (across Europe) and CONCORD (worldwide). Gonçalo also worked to have the registry’s results included in the latest volume of the scientific series ‘Cancer Incidence in Five Continents’.

As a consultant of IARC, Gonçalo participated in two imPACT missions, one with the Republic of Angola and the other with the Republic of Mozambique, both of which were sponsored by the Programme of Action for Cancer Therapy of the International Atomic Energy Agency. Gonçalo also worked as a consultant for the African Cancer Registry Network to establish cancer registries in Angola, Mozambique, and Cape Verde. 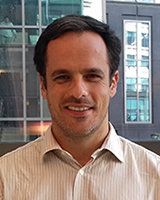