Steve Friedman, MHSA, joined the Surveillance Research Program as a Senior Advisor for Operations in July of 2015. He works on several major initiatives, including SEER, the Virtual Bio-Repository (VTR) and the Virtual Pooled Registry (VPR). In January 2018 he was named the Lead Contracting Officer Representative (COR) for the SEER Program.

Mr. Friedman joined the National Cancer Institute in 2004, first as a contractor serving as Program Manager for the Protocol and Information Office (PIO) and then in November 2005 as Deputy Head, PIO as a federal employee. In July 2006, he was named as Acting Head, PIO which also included oversight for the CTEP Enterprise IT System. In November 2009, he was named as Chief, Operations and Informatics Branch (OIB). He also served as the DCTD liaison to the NCI CIO's office dealing with such issues as IT security and protecting the privacy of patient data. Mr. Friedman is a survivor of testicular cancer since 1995. In 2003, Mr. Friedman was selected as one of 26 cyclists to ride across the country to raise awareness for cancer clinical trials in the inaugural Tour of Hope. Mr. Friedman served as a founding Director for the Association for the Accreditation of Human Research Protection Programs and is a past President of the Board for the Ulman Cancer Fund for Young Adults. He is the recipient of several NIH Merit Awards and a NIH Director’s Award. Mr. Friedman received his Master of Health Services Administration from the George Washington University and is currently Adjunct Faculty with the MPH@GWU program.

Mr. Friedman is originally from Brooklyn, NY. In his spare time, he likes to try and keep up with his three kids, bicycling, and serving as a volunteer EMT with BCC Rescue squad. 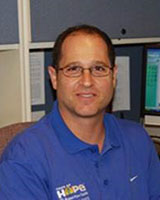 Office of the Associate Director