Sheshadri (Shesh) Mudiyanur joined the National Cancer Institute’s (NCI) Surveillance Research Program (SRP) in the Surveillance Informatics Branch (SIB) in April 2021 as a Contractor/Data Scientist. During his time here, Shesh will work on enhancing pathology, radiology and image reporting for the Surveillance, Epidemiology and End Results (SEER) Program. His initial focus is on digital pathology image sharing initiatives and he is excited to be a part of SRP.

Shesh is a Solutions architect who has been with Booz Allen since 2012 and brings with him 15+ years of enterprise experience. He has a background in data strategy, architecture and analytics and has contributed to major programs across several domains, including health outcomes research. A particular focus is his role as a member of the startup team and key contributor to the Observational Medical Outcomes Partnership

(OMOP) program. He was co-creator of the initial OMOP Common Data Model

Shesh has a Bachelor of Engineering degree from National Institute of Technology Karnataka in India and a Master’s degree in Industrial Engineering from West Virginia University. 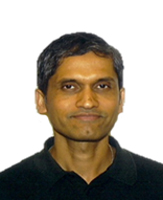