Overview of the Jump and Comparability Ratio Models

The jump and comparability ratio models are available in Joinpoint as of version 4.4.0.0. As of version 4.8.0.0, they are labeled as a "beta" feature.

The jump model and comparability ratio model in the Joinpoint software provide a direct estimation of trend data (e.g. cancer rates) where there is a coding change, which causes a "jump" in the rates, but is assumed not to affect the underlying trend. The user supplies the location of the last data point before the coding change occurs. The software automatically locates the discontinuity or "jump" halfway between this last data point and the next one. The software currently only allows for a single "jump". For example, the ICD coding changes (Anderson et al. 2001) from ICD-9 to ICD-10 for classification rules for selecting underlying causes of death. The last year that ICD-9 was used was 1998, and ICD-10 was implemented starting in 1999. If the user had entered annual data, they would enter 1998, and the software would place the "jump" at 1998.5.

There are two different options for how a model can be implemented to allow for a coding change:

Comparability Ratio Model: In some cases a "double coding" study has been conducted, where a certain number of cases have been coded under both the old and new systems. In such cases a "comparability ratio" and its standard error can be externally entered, where the comparability ratio is defined as:

Jump Model: In other situations, there may be no "double coding" studies available. In these situations, the "jump" is a parameter in the model (rather than entered externally) and is estimated directly. It is the underlying assumption of this model (i.e. that the same trend continues before and after the jump) that allows this type of model to be estimated. For the jump model, the user only has to enter the location of the last data point before the coding change occurs. The model can be described as below. For y = log r, where r is the rate at a given time, and χ is the time, assume:

where τ's are unknown change-points, s is the known location of the coding change, εi are independent errors, the symbol a+ represents the a for a>0 and 0 if a≤0, I is an indicator function equaling to 1 if the condition is satisfied, β’s, δ’s, τ's and γ are the model parameters to be estimated. The parameter γ represents the jump and exp(γ) represents the ratio of rates coded under the new coding scheme divided by rates coded under the old coding scheme (i.e. the comparability ratio estimated from the jump model). An example is provided to demonstrate how incorporating a coding change (even one that is relatively modest) can change the overall conclusions about the trends. For melanoma, the published ICD-9 to ICD-10 comparability ratio is 0.9677 (SE = 0.0032, 95% CI (0.9614, 0.9741)). Figure 1 shows US melanoma mortality for all races and both genders from 1992 through 2014 using the standard joinpoint model, the comparability ratio model, and the jump model. The standard joinpoint model found no joinpoints, and shows a flat trend with a non-significant APC of -0.06% per year. A comparability ratio less than one (i.e. 0.9677) forces a sudden drop in the trend line between 1998 and 1999. With this shift, the comparability ratio model shows a joinpoint in 2010 with a significant rise of 0.30% per year prior to 2010 and a significant fall from 2010 to 2014 of 1.43% per year. The jump model estimates a similar comparability ratio of 0.9444, and finds a joinpoint at 2009 with a significant rise of 0.50% per year prior to the joinpoint, and a significant decline of 1.19% after. These are qualitatively different results when the coding change from ICD-9 to ICD-10 is taken into account.

Motivated by this example, the complete set of US melanoma mortality results in NCI’s Cancer Statistics Review, with results from the standard joinpoint model, jump model and comparability ratio model, can be found on the Melanoma example. 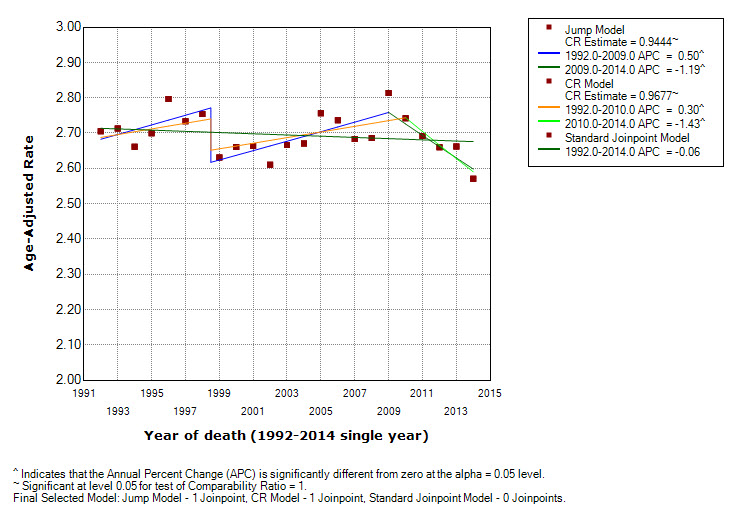 Which model to use?

Considerations of which model to use could include: 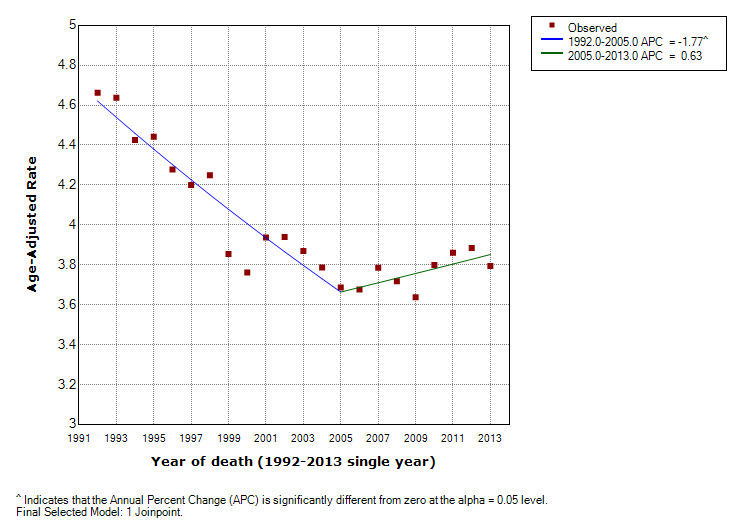 Figure 3. Comparability ratio model for White non-Hispanic Male US Mortality for Oral Cavity and Pharynx Cancers, 1992-2013. The comparability ratio (input from a double coding study) is 0.9603 with standard error = 0.0039. 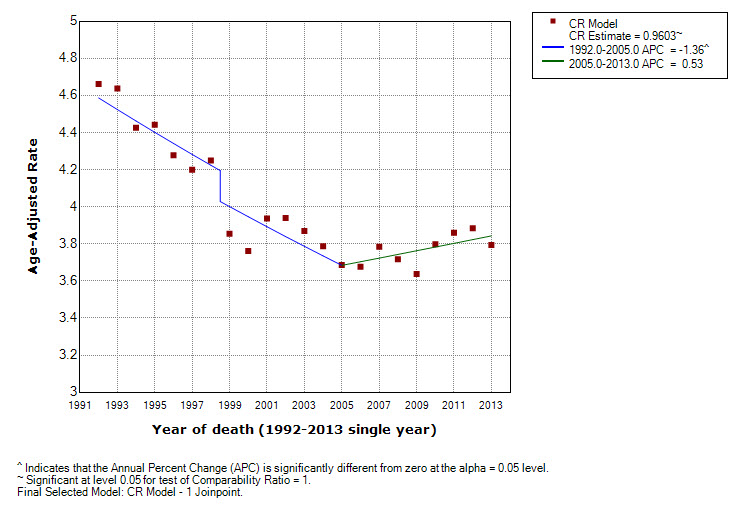 Figure 4. Jump model for White non-Hispanic Males US Mortality for Oral Cavity and Pharynx Cancers, 1992-2013. The estimate of the comparability ratio is 0.8844 with standard error = 0.0311. 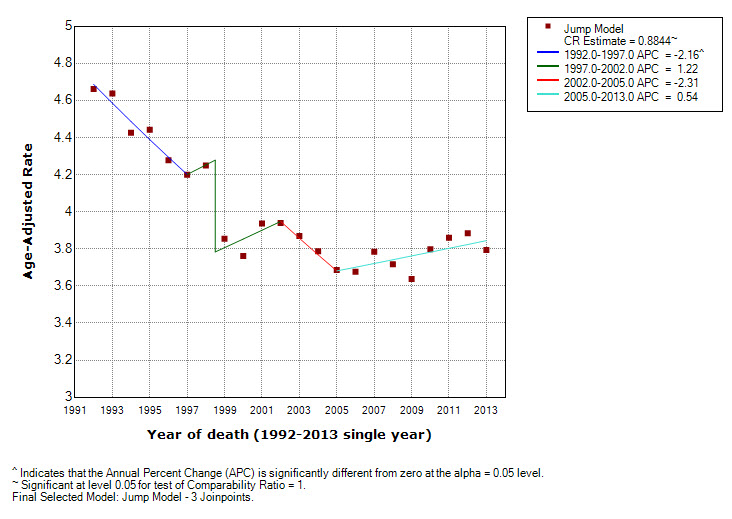 In general, it is best to do a careful examination of the models using the criteria above before deciding which model to select. An algorithmic approach may be desired in the case of many data sequences to be analyzed. See Melanoma for an example of an algorithmic approach.